Writing a New Series—the Wolff Brothers by Terry Spear, Author of You Had Me at Wolf

Silver Town has been so popular with readers for many years. I think the idea that a town that is solely run by wolves has readers wanting to move there and be part of the family and the community. Not to mention the Silver wolves have long captured readers’ imaginations for over a decade!

Other wolves hear what they have and want a piece of that. Who wouldn’t? The wolves as a pack are loyal, protective, fun to be around, and take care of their own. It doesn’t matter the kind of trouble they might be in, the wolves are there as a united force to deal with it.

Who wouldn’t want that? When we, as individuals, or small families, have to handle all crises on our own. Who wouldn’t want an extended family who is fiercely protective, standing up for you if you’re in trouble?

You Had Me at Wolf
Wolff Brothers Book 1
Buy Now

A wolf on a mission cannot be deterred...

The hot, powerful Wolff brothers have moved to the outskirts of Silver Town and opened a ski lodge. They've always wanted to live in a wolf-controlled area, and now they have their chance. They're settling in for a quiet winter, when their lives suddenly become way more exciting than they'd ever planned.

Private Investigator and Gray wolf shifter Josie Grayson is hot on the trail of a dangerous criminal hiding out at the ski lodge when her partner takes ill and must leave her to pursue the mission alone. Blake Wolff steps in—he can't resist the allure of this brilliant and focused she-wolf whose presence awakens a long dormant yearning in his heart.

As pursuit of their quarry heats up, Blake has a mission of his own...to convince Josie that there's more to life than work...and that she's his perfect mate.

Not that the Wolff Brothers are in any sort of trouble, but the two brothers and their two sisters are resettling in Silver Town, establishing the new ski lodge and restaurant, and eager to join forces with the Silver wolf pack that has been there since the beginning. They want to be part of that community, unlike how it is where they lived in Vermont and didn’t have the backing of a large wolf pack.

As a wolf, they want to find mates and be able to run when they want, without the concern that they’re living mostly among humans. And here is the prime opportunity. A wolf pack that has a ski resort and no lodge or restaurant.

Not everyone embraces the new business all at once. They’re still newcomer wolves. Not part of the original pack. And their business can impact on the other businesses in town.

But there is a she-wolf shortage in town and the brothers do have two sisters. Not to mention everyone is enjoying the new lodge and restaurant.

It’s important to keep the old, the faithful, the tried and true, and every once in a while, add something new. Change can be painful. Growing pains can be a hassle. But in the end, everyone benefits.

So that’s how the Wolff Brothers series began. A wolf pack looking for a new home. An old pack dealing with growing pains. And a new arrival at the ski lodge who creates an avalanche of trouble right from the beginning for everyone.

A new series and lots more fun in Silver Town!

Giveaway Over: The lucky print book winner is: Billye Herndon

USA Today bestselling author Terry Spear has written over forty paranormal romances. Heart of the Wolf was named a Publishers Weekly Best Book of the Year and Billionaire in Wolf’s Clothing was a Romantic Times Top Pick. A retired officer of the U.S. Army Reserves, Terry also creates award-winning teddy bears. She lives in Spring, Texas. 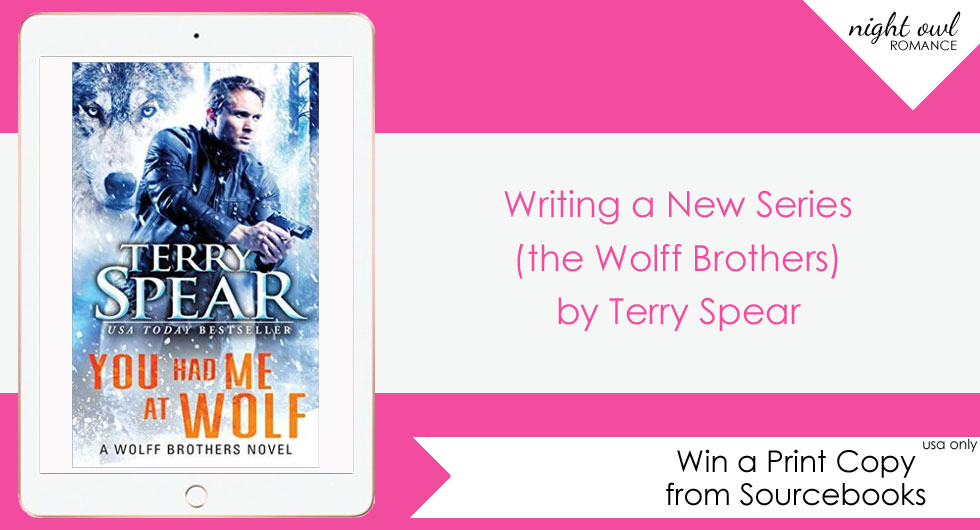