Today we have Paige Tyler's character, Knox Lawson on to share his story.

I was in the Navy SEALs for eight years. There was a time when I thought I’d be in until they used a crowbar to shove me out the door. But then something happened, and everything I thought was important to me, well…it wasn’t as important as it was before.

I was lost for a little while after that, I guess, not sure where I was supposed to go or what I was supposed to do with myself. It was while I was wandering around that I fell in with a group of people I thought I fit in with perfectly. They called themselves hunters and said they were protecting the world from monsters. I thought that was what I wanted to do, too. Until I realized we weren’t protecting the world from monsters. We were the monsters. The first time I saw what they did to a werewolf they captured… I tried to stop it, but it was too late. I knew then that I’d made a horrible mistake. But getting out wasn’t an option.

The people we worked for sent a group of us to Dallas, telling us there was a large pack of werewolves hiding there undercover as the Dallas PD SWAT team. They made it seem like some kind of blasphemy that werewolves would be acting like cops. The people in charge wanted us to attack the SWAT compound—in the middle of a damn wedding reception—and kill as many werewolves as we could. If any humans were killed, that was just collateral damage. That’s what people got for willingly getting close to a pack of werewolves.

Then I saw her—SWAT Officer Rachel Bennett—running across the compound with a gun in her hand, wearing a killer dress that showed off a set of legs to die for. Everything slowed as I realized she was a werewolf—and beautiful. When one of the other hunters lifted a weapon to shoot her, I immediately reacted, killing a man I’d known for weeks.

The female werewolf spun and put me in her sights. She could have killed me…but she didn’t. I ran, only figuring out as I was getting away that I’d been shot by the hunter I’d killed in the process of saving her life. I should have died, but I didn’t.

Instead, I ended up becoming a werewolf. No clue how that happened since I sure as hell wasn’t bitten by anyone. But I guess karma is like that. Go out to hunt werewolves. Realize you’re an idiot. Get turned into a werewolf.

So, now I’m following Officer Bennett around like a stalker, hoping she can tell me tell me how to fix this problem I have. Maybe if I don’t eat anyone, she can turn me back? And wanting help with my werewolf problem is the only reason I’m following her. It has nothing to do with the fact that she’s so beautiful I can’t take my eyes off her—or that she smells so good it makes me drool. I’m just in Dallas for her help. I swear.

She let him get away

SWAT werewolf Rachel Bennett is hounded by nightmares after a vicious attack left her with PTSD. Not knowing who or what she can trust anymore, she's relieved to be assigned to a high-profile protective detail. Diving into work might be the distraction she needs, until she notices the mysterious hunk who seems to follow her wherever she goes—and recognizes him.

Now he needs her help...

After he's badly injured, former Navy SEAL Knox Lawson seeks out Rachel when he realizes he's turning into a werewolf. He'd once been part of the group hunting her kind, but he knew he had to quit when he found Rachel in his crosshairs. Now he desperately needs her help.

Rachel isn't sure she trusts Knox, but having him around keeps the nightmares—and the monster creating them—away. Knox might not know much about being a werewolf, but there's no doubt he'll do everything in his power to win her trust and keep her safe.

Paige Tyler is a New York Times and USA Today bestselling author of action-packed romantic suspense, romantic thrillers, and paranormal romance. Paige writes books about hunky alpha males and the kick-butt heroines they fall in love with. She lives with her very own military hero (a.k.a. her husband) and their adorable dog on the beautiful Florida coast. 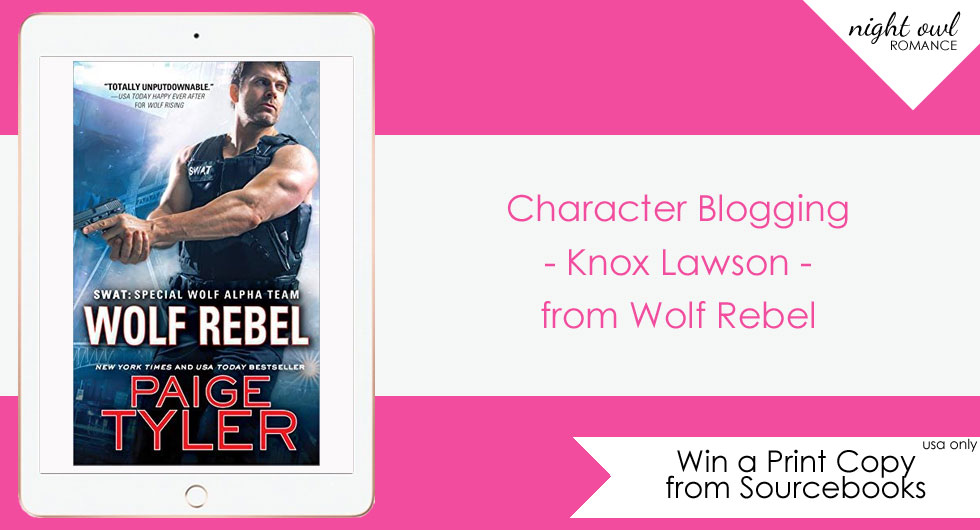