Are you ready for a new series. Sue Ward Drake has one for you. I hope you enjoy the excerpt below and enter to win a copy.

On the knife edge of danger in the streets of New Orleans, theserugged men call the Big Easy home, and they'll do whatever it takes to protecttheir own

Ex-army ranger Mitch Guidrynever should have let his brothers talk him into joining them in the Big Easy.Particularly when they have him going head-to-head with the very last thing heneeds: a feisty redhead who has more opinions than even his hard-headedbrothers. Loyal and overprotective to a fault, Catherine Hurley will doeverything she can to stop Mitch from finding her fugitive brother...and yet, hecan't get enough of her.

Cath should be furious withthe overbearing ex-ranger who shows up on her doorstep looking for her brother.Sure, Mitch Guidry is hotter than a Louisiana summer and pushes every one ofher buttons, but he's also an immediate threat to her family, and family iseverything to Cath. Unfortunately, the only way to save her brother is to stickto Mitch like glue. But sharing close quarters with him while they search forher missing brother together proves to be more than a littlechallenging...particularly when it comes to protecting her heart.

SueWard Drakes takes you on a wild ride through the steamy streets of New Orleansin this action-packed, sexy romantic suspense!

IN THE ALLEY – FIRST MEET

Mitch lurched forward, banging his head on the open door. His boots slipped on some kind of grit, and he grabbed for support.

Soft warm skin slid under his grasp. The most spectacular blue eyes he’d ever seen glared at him but Mitch held onto her gaze as if to a lifeline.

“Do you mind?” Her low, sultry voice whispered through him.

Mitch blinked as if he came awake after a long sleep and let go of the woman’s slender arm.

“Didn’t you see the skillet?” She waved a hand at the stove. “I’m making dinner.”

“Bon appétit.” Mitch lifted a corner of his mouth, and her pretty face flushed. She stepped away, and he plunged outside after his fugitive.

A spotlight in the patio cast deep shadows into the corners. A dog yipped inside a rear apartment. Big jars with cascading vines standing at either corner were too small to hide behind.

Mitch hugged the corner of the house so as not to present a target. His stupid fixation on the redhead had lost him too much time. Hurley could have already escaped. Or he could be standing only a few feet away in the black entrance alley, his knife ready. Mitch held still, but the shush-shush of someone breathing didn’t carry back to him. Dammit.

He drove a fist into the vinyl siding. An old war injury spread agony across his back, and he swallowed back another curse. Keep looking. Don’t think about failure.

Hal came up behind him. “I’ll check the other side.”

Mitch played his light down the alley. A clump of fern grew in the elbow of one of the many pipes hugging the old house. Nothing else. No one else. He raced to the street gate and scanned the empty sidewalk.

“I demand an apology for barging into my house.” The redhead stood close behind him, but he hadn’t even heard her creeping up on him.

In the narrow confines, he barely had room to turn around without brushing her, but he managed. Producing more aggro for his shoulder. “If this is not your private alley, you have no jurisdiction. I’m the one being insulted.”

“I-Insulted?” She scowled. “How do you figure that?”

Light from the street fell on her pale face and flushed cheeks. He caught a powder fresh scent. She clutched the sides of a robe together and he admired her slender neck. Perfect for nuzzling. Not by him. Not now.

His flashlight beam shone down the alley to the swaying leaves of the banana trees at the back of the patio. He stepped forward. She didn’t retreat, and his legs now pressed hers, making certain body parts grow heavier. “Turn around and go back.” Don’t make me swear like my old sergeant.

“Not until you leave.” Her hand loosened, and she accidentally flashed cleavage. “We can pretend I’m seeing you out. Southern manners and all.”

That accent of hers belonged more to California than to any Southern state, but his tightening groin didn’t give a shit. Nor did his resolve. He lowered his voice to a purr. “You really should go back to the patio.”

“Nothing over there but the garbage cans,” Hal called a moment before his silhouette appeared at the opposite end of the dark alley.

Mitch leaned close to her ear. “If you don’t want Hal searching your house, you need to stop him.”

“You got him?” Hal started toward them.

“Wait.” Mitch waved his brother back and raised his eyebrows at the female in his way. “We’re coming out.”

She huffed out a breath but spun around. In the lighted patio, Hal glanced from her to him, his mouth turning down. “You missed him.”

For now. The beauty crossed her arms, but Mitch shooed her away. “We’re finished. Go inside.”

He caught his brother’s arm and jerked his head toward the shrubs and banana trees. “The skip might be lurking.”

Hal waded through one side of the garden, Mitch, the other. Their twin beams hit a high brick wall without revealing a soul. Some Quarter landlords embedded broken bottles atop their walls to keep out thieves, but Mitch didn’t see any here. He stowed his light and backtracked to the patio. “Hold the trees away, Hal.”

“I still want an apology.” The female wildcat pounced.

“I told you to go inside.” Mitch judged the height of the barrier and took a running leap, hauled himself up to straddle the wall.

“What are you doing?” The woman’s pale face appeared in the shadowed shrubs below.

“Fulfilling your deepest desires.” Mitch smirked. “Like the Southern gentleman I am.”

This giveaway is now over. The lucky print book winner is: Denise Carlson 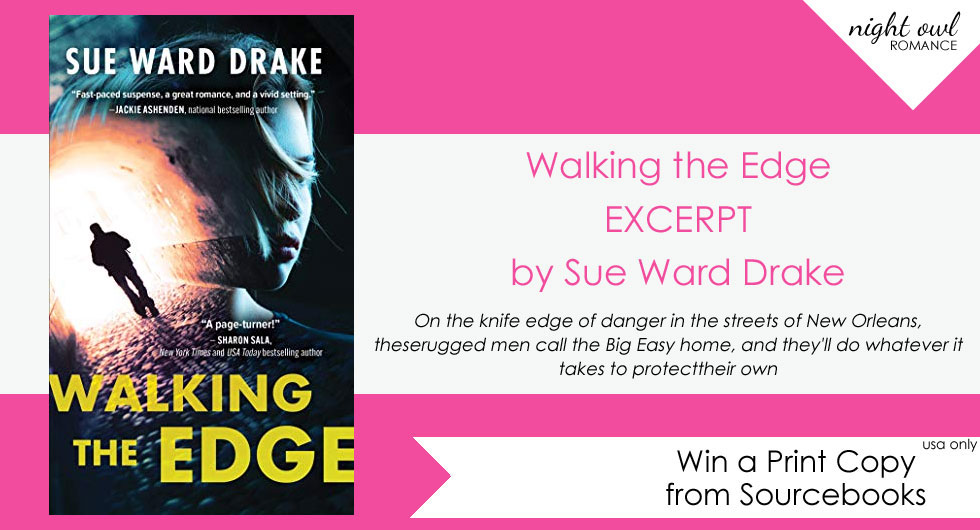