Until the End by Juno Rushdan Excerpt

Today we have romance author Juno Rushdan stopping over to share the third in her Final Hour romantic suspense novel series. Are you ready for the action? I hope so, because Juno is ready to take you on an adventure filled with action and sexy times.

Oh, plus she has a book giveaway for you!

“You had them create Ever Shield?” After she nodded, he asked, “Why?”

“The government shouldn’t have the right or the ability to invade the privacy of citizens and violate constitutional rights without a warrant. I wanted to do something about it. My guys were brilliant. Ever Shield ended up being bigger and more powerful than I imagined possible.”

She had no idea.

“Until I knew how to use it responsibly,” she said, “I thought it best if we sat on it. Despite what you and your boss might think, I love my country. I’m a patriot, not a terrorist.”

From what he knew of her, everything she said made sense.

Kit went to the fridge and opened it. “Domestic beer. Not surprising.” Bending over, she inspected his produce drawer.

His gaze inched up her long, bare legs—over her surprisingly nice ass—but his vision snagged on a purple bruise on her hip.

She glanced back at him as if to see whether he was staring. Busted!

“Please.” He shrugged. “I’m a man. We’re wired to look. Besides, it was your bruise that held my attention. Don’t worry, you’re not my type.”

“And what type is that? A vegetarian?” Kit pursed her sensuous mouth in a pout.

It was a crime against nature to have such an attractive woman in his home and not be able to kiss her. “No. A POI.” A person of interest. He faced the stove. “How did you get all banged up?”

“I fell down the stairs running out of the Lair.”

He plated the food. She grabbed a cold bottled water and he poured two fingers of Four Roses Single Barrel, offering her a drink, but she declined.

“Is Castle your real name or a nickname? Like Reaper?”

“Real. My dad named Maddox and me after two guys he worked with who saved his life.”

“That’s pretty cool.” She threw a healthy amount of parmesan on her pasta and dug in.

Kit closed her eyes in a dreamy way and a delirious moan escaped her. Followed by another and another with each mouthful like she was having one giant food-gasm.

He gave a low chuckle and glanced at her clean plate. “Did you enjoy that?”

She flashed an oh-yeah smirk but said, “I’m hypoglycemic and was starving. I was wired to moan once food hit my mouth.” Nibbling her lower lip, she dropped her gaze to his cup. “You’re so different than the sort of men I gravitate to. Domestic beer. The gun. Insane muscles. Drinking good bourbon from a red SOLO cup. Calluses. Freight-train personality.”

She had a tongue capable of launching a ballistic attack. The litany of insults left him speechless. Even the bit about his muscles didn’t sound good.

“Not that there’s any gravitation happening here.” She waved a dismissive hand between them, doing another lip nibble that made something in his chest contract like a fist.

Dammit to hell. She grated on him, but rather than getting ticked, he found it invigorating. No one spoke to him that way, throwing him off-balance. No one.

“I know what you mean,” he said, winding up to dish it back to her as good as she’d served it. “The women I usually have in my home aren’t snooping vegans with high-maintenance personalities. No yoga-obsessed princesses who have piss-poor manners, dismissing people with whatever.”

For a second, he thought he’d gone too far.

“Vegetarian.” Her tongue snaked out, wetting her pink lips. “Not vegan.” She winked, and his center of gravity shifted. “And my doctor has advised me against yoga because of possible joint subluxation. I have Ehlers-Danlos syndrome, which causes hypermobility.” At the questioning look he pulled on, she added, “It means I’m double-jointed.”

His mind nosedived straight into the gutter. As tempting as the images flooding his head were, now wasn’t the time to indulge in them, but one thing was inescapable.

Until the End
by Juno Rushdan
Final Hour Book 3

And he may be her only chance of surviving the night.

Gray Box operative Castle Kinkade always gets the job done, no matter how tough the assignment. But when he agrees to protect white-hat hacker Kit Westcott, Castle's loyalty is tested like never before. Trapped in the closest of quarters, protective instincts flaring, he can feel the ice surrounding his heart melt...and he knows he'd do anything to keep Kit safe.

Even defy the rules that shaped his life.

Castle is the last person Kit should confide in, let alone be attracted to, but he's the only ally she has left. Under threat of imminent attack—and a chilling conspiracy that hits too close to home—Castle and Kit are forced to put their hearts and lives on the line...and stop at nothing to face the greatest danger the world has ever known.

The Final Hour Series:
Every Last Breath
Nothing to Fear
Until the End

About the Author: Juno Rushdan draws from real-life inspiration as a former U.S. Air Force Intelligence Officer to craft sizzling romantic thrillers.  Although she is a native New Yorker, wanderlust has taken her across the globe. She’s visited more than twenty different countries and has lived in England and Germany. When she’s not writing, Juno loves spending time with her family. She currently resides in Virginia.

This giveaway is over. The lucky winner is: Martin Bodnar 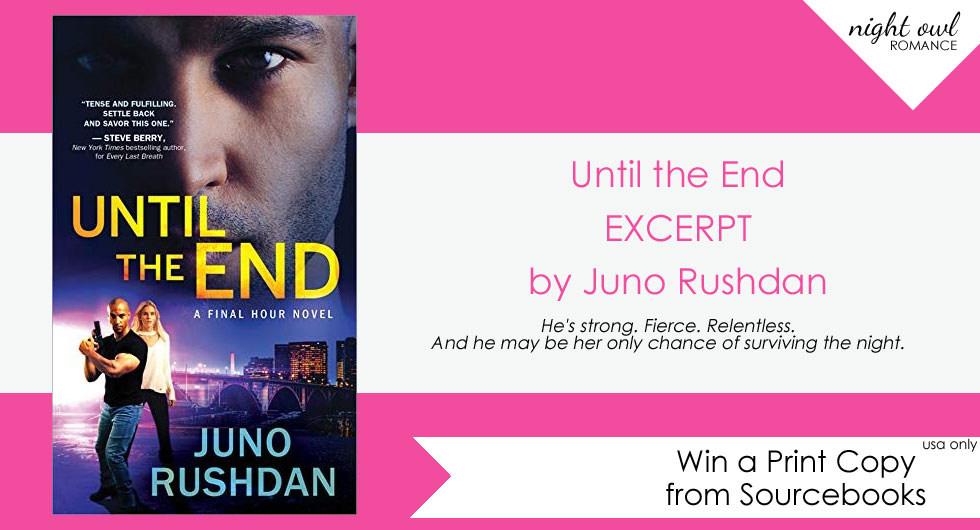