Today Sarah Morgenthaler has stopped on over to share her book "The Tourist Attraction". It's time to take a trip up to Alaska and meet Zoey and Graham. This is a contemporary romance novel for those who want to armchair travel. It's a cheap trip with loads of snuggles.

Lets just jump right into an excerpt and then have you enter the romance book giveaway!

What had she just gotten herself into? She didn’t even drink.

Those same words had been replaying in Zoey Caldwell’s head ever since she’d gotten off the plane in Anchorage. She wasn’t a risk taker, far from it, but she’d dreamed of coming to Alaska her whole life. Zoey had scrimped and saved every spare penny she could scrape together for years. When she had finally saved up enough and Lana mentioned her plans for her next trip to Moose Springs, offering to share a room as she always did, Zoey couldn’t pass up the chance at her dream vacation.

A trip to Alaska wasn’t just the top item on Zoey’s bucket list. Alaska was the whole bucket and the water inside it.

Never had Zoey been so excited, so overwhelmed, and so ready to sleep off the jet lag her nine-hour flight had given her. But Lana insisted on them coming to the rustic little hamburger and hot dog joint, claiming this a rite of passage. The Tourist Trap was charming in the same way the guy at the grill was charming. A little rough around the edges, but amusing. There weren’t any menus, only a whiteboard sign with a Magic Marker. It read Menu: Same crap we always have. Specials: Whatever you jerks didn’t eat yesterday.

Swirling her glass idly, Zoey decided the gorgeous cook should have at least added salt to her yellow water and made it room temperature.

If one was going to be a smart-ass, it was important to go all in.

Graham was disturbingly attractive. Too attractive. Grab your moose pee and run back to the hotel on the mountain type of attractive. In Zoey’s world, that level of attractiveness was almost off-putting. Medium attractive was more her type. Safer. Calmer. Less…whatever was happening over there behind that grill.

If the Tourist Trap wanted to make money, they needed cooks who were remotely approachable. Not tall, muscled, scruffy-faced men in blue jeans and snug white T-shirts with warm eyes.

He caught her looking at him and winked.

“Not doing what, love?” Lana dropped down in the seat next to Zoey, drumming her fingernails on the tabletop. “Who are we not doing?”

“No one.” The clack of rattling ice cubes against metal pulled her attention. Yep. Sexy T-shirt man was shaking something in a makeshift cocktail shaker fashioned from a YETI tumbler. Strong fingers held the shaker closed with a single hand, biceps flexing as he absently shook the YETI and scooted fresh-seared burgers to the far side of the flat top grill.

Lana followed Zoey’s eyes. “Oh, trust me. He’s not for sale. That boy is locals only. But he can shake a cocktail, can’t he?”

He had a strict "no tourists" policy...
Until she broke all of his rules.

When Graham Barnett named his diner The Tourist Trap, he meant it as a joke. Now he's stuck slinging reindeer dogs to an endless parade of resort visitors who couldn't interest him less. Not even the sweet, enthusiastic tourist in the corner who blushes every time he looks her way...

Two weeks in Alaska isn't just the top item on Zoey Caldwell's bucket list. It's the whole bucket. One look at the mountain town of Moose Springs and she's smitten. But when an act of kindness brings Zoey into Graham's world, she may just find there's more to the grumpy local than meets the eye...and more to love in Moose Springs than just the Alaskan wilderness.

About the Author: Geologist and lifelong science nerd, SARAH MORGENTHALER is a passionate supporter of chocolate chip cookies, geeking out over rocks, and playing with her rescue pit bull, Sammy. When not writing romantic comedy and contemporary romance set in far-off places, Sarah can be found traveling with her husband, hiking national parks, and enjoying her own happily ever after. Sarah is a two-time Golden Heart Finalist and winner of the NOLA STARS Suzannah award.

Comment Question: Tell us what has you wanting to visit Alaska... either virtually and / or physically.

This giveaway is now over. The lucky winner is Glenda Gordon 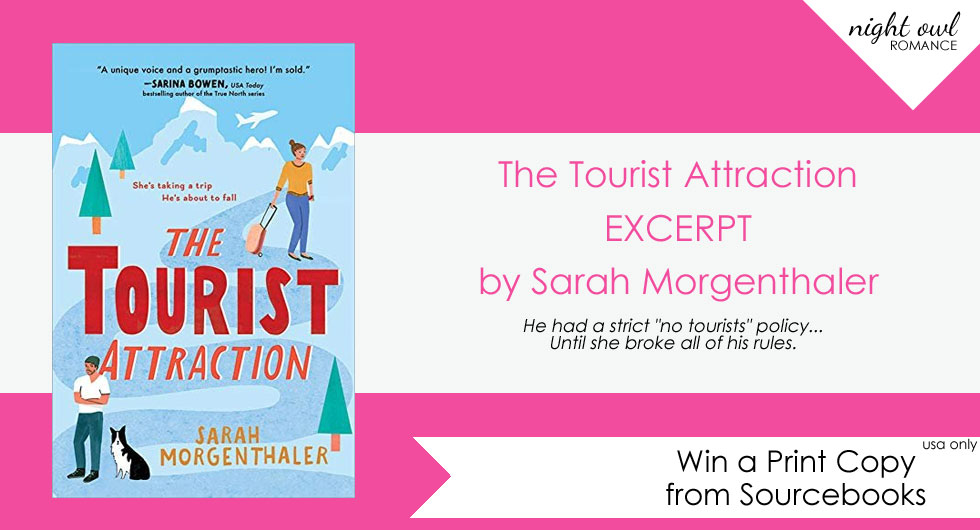