Tammie here along with historical romance author Margaret Brownley. Margaret's newest book is "The Outlaw's Daughter". This is book three in her Haywire Brides series where she takes you to Texas... my current home state. But in this case you will be visiting quite a bit back in history. If you like a man in a cowboy hat and no shirt, hold on tight. Margaret has both an excerpt and book giveaway for you.

Matt had just finished shaving when a knock sounded at his door. Thinking it was Jesse, he reached for a towel and wiped the foamy soap off his chin.

“Give me a minute,” he called. Dressed in trousers but no shirt, he moved away from the dry sink.

The knock came again, this time more urgently, and Matt shook his head.

If Jesse ever hoped to be a Ranger, he’d best learn the importance of patience. Fearing the boy would disturb the other hotel guests, Matt tore the door open, ready to scold him, but the words never left his mouth.

Much to his surprise, it wasn’t Jesse at the door. Instead, Ellie-May Blackwell stood glaring at him, and she looked as steamed as a locomotive.

“Why are you giving my daughter presents?” she demanded.

He quirked an eyebrow. “How do you know I did?”

He sighed in resignation. He should have known she would check. Not that he meant it to be a secret. He stepped aside. “Come in.”

Her gaze lit on his bare chest. Cheeks turning red, she quickly lowered her eyes. “A lady does not enter a gentleman’s hotel room.”

Her lashes flew up and her lips parted. “I’ll do no such thing!”

He glanced up and down the hall. Three hotel guests peered from the doorways of nearby rooms and gazed at Matt with curious stares.

Thinking the lady might prefer airing her grievances in private, Matt grabbed her by the hand and pulled her into his room. Not that the paper-thin walls allowed for much privacy, but they were better than nothing. Releasing her hand, he slammed the door shut.

He reached for his shirt and quickly donned it. “You can look now.”

She lifted her head and looked him square in the eye. The sweet, delicate scent of her perfume seemed at odds with her defiant stance. Despite her small stature, she looked as formidable as a bull seeing red.

“You haven’t answered my question,” she sputtered. “Why did you give my daughter that music box?”

He tucked his shirt into his trousers and reached for his gun belt. “I thought you’d be pleased. It is her birthday.”

Her eyes widened, allowing him to see the golden flecks in their depths. “How do you know that?”

“Jesse,” he said and shrugged. “So what’s the harm? Gordon said the box played music that reminded her of her father.”

“The father that you accused of robbing stages!”

“I never accused him,” Matt said, buckling his gun belt in place. At least not to her face. “I’d simply wanted to ask him for information.”

Pursing her mouth, she studied him like a frog about to snap up a fly. “You still haven’t answered my question. Why?”

“Why did I give your daughter the music box?” He hadn’t given much thought as to the reason. All he knew is that he’d felt a strong compulsion to do it. “Maybe because I know how it feels to lose a pa at a young age.”

The answer seemed to satisfy her. At least, she looked less inclined to do him bodily harm. “I don’t want your charity.”

He shook his head. “I don’t want your money.”

Her forehead creased. “Then what do you want?”

“You bought my daughter an expensive gift and want nothing in return?” She looked and sounded incredulous.

“Is that so hard to believe?”

“You hardly know us.”

“I know enough to want to make a little girl happy,” he said.

A look of vulnerability crossed Ellie-May Blackwell’s face, and much to his surprise, her eyes filled with tears.

He took a step forward but stopped short of touching her. “I didn’t mean to make you cry,” he said.

She swiped a tear away from her cheek. “It’s just that…” she began and stopped. He sensed her hesitation. Saw a shadow of indecision cross her face. “I’m not used to such kindness.”

His eyebrows shot up. “I’d say that’s a real shame,” he said. “A widow with two children deserves all the kindness and consideration she can get.”

The tears magnified the pain in her eyes, and he felt an overwhelming need to comfort her. Protect her. He’d seen those same eyes flash with anger, harden in determination, and soften with tenderness for her child. But now, looking into her eyes, he felt as if her heart was opening to him like the petals of a flower, beckoning him to peer inside.

“There, now,” he said soothingly. Cursing himself for the inadequacy of his words, he drew a clean handkerchief from his pocket and dabbed her cheeks dry. It seemed that all he could do was wipe away her tears, and he was grateful that she let him do it.

The Outlaw's Daughter
by Margaret Brownley
The Haywire Brides Book 3

He may be a Texas Ranger
But he only has eyes for the outlaw's beautiful daughter...

Texas Ranger Matt Taggert is on the trail of a wanted man. He has good reason to believe that Ellie-May's late husband was involved in a stagecoach robbery, and he's here to see justice done. But when he arrives in town, he discovers the thief has become a local hero...and his beautiful young widow isn't too happy to see some lawman out to tarnish her family's newly spotless reputation.

Ellie-May's shaken by her encounter with the Ranger. Having grown up an outlaw's daughter, she'll do anything to keep her children safe—and if that means hardening her heart against the handsome lawman's smiles, then so be it. Because she knows Matt isn't about to give up his search. He's out to redeem himself and find proof that Ellie-May's husband wasn't the saint everyone claims...even if it means losing the love neither expected to discover along the way.

About the Author: New York Times bestselling author Margaret Brownley has penned more than forty-five novels and novellas. She's a two-time Romance Writers of American RITA® finalist and has written for a TV soap. She is also a recipient of the Romantic Times Pioneer Award. She makes her home in Southern California. Visit her online at margaret-brownley.com.

Comment Question: What has you wanting to read a Texas based historical romance novel?

This giveaway is over. The lucky winner is: Darlene Carroll 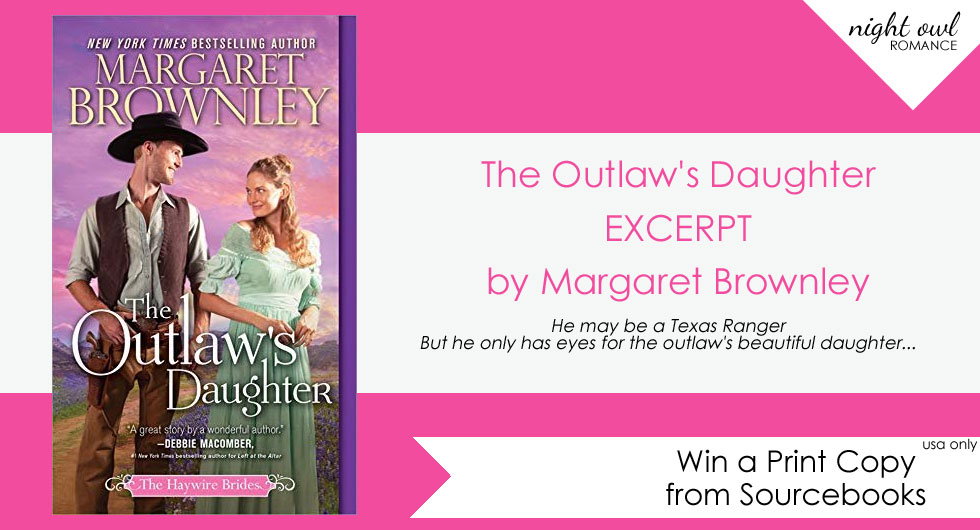