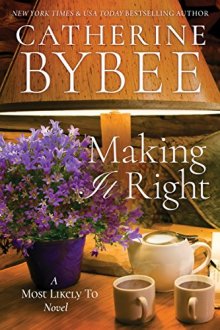 In the final book in bestselling author Catherine Bybee’s Most Likely To trilogy, River Bend’s rebel follows in her father’s footsteps to become sheriff. But it might be time to forge her own path…

Some kids inherit a family business; Jo Ward inherited a badge. Once voted Most Likely to End Up in Jail, the town wild child has become sheriff—hell-bent on uncovering the truth about her father’s mysterious death. Life is quiet in rustic River Bend, but Jo longs for something beyond her small hometown and the painful memories it holds. All that keeps her sane is the support of her best friends, Melanie and Zoe.

But when Jo signs up for an expert law enforcement training seminar, she meets Gill Clausen, whose haunting eyes and dangerously sexy vibe just may challenge her single-minded focus. Commitment-phobic Jo can’t deny her attraction to the arrogant federal agent, and when odd things start happening around River Bend and danger surrounds her, she realizes she’ll need his help to discover who’s out to remove her from River Bend…permanently.

As Jo and Gill work together, it’s clear they make a great team. But can Jo loosen her grip on the past enough to let love in and reach for the future?

He led her into his room, which was surprisingly clean. A single king-size bed, a dresser with an old TV, a small refrigerator, microwave, and two lamps rounded out the visual interest inside the small room. She had less than thirty seconds to study the interior before he tossed the keys to his bike on the dresser and invaded her personal space.

She shook her head and licked her lips.

His gaze swept her face. “I’ll just be a minute,” he said before disappearing behind the bathroom door. She heard the water turn on and switched her attention to the side table in the room. What would be in there? Did he have stacks of the same clothes he wore now? The desire to know more about him clashed with the desire to know nothing at all.

Jo sat on the edge of the bed to keep her hands from opening drawers and learning his secrets. There was a weapon in the room somewhere, she could smell it.

When he emerged from the bathroom, his eyes fell on her and that half grin emerged once again.

“You look comfortable,” he said.

She leaned her elbows back on the bed. “I could be better.” It felt good to tease and say the things she wanted to without censure.

His smile said he approved.

He approached slowly, like a predator. Only his grin gave him away.

“I can handle myself.”

He narrowed his eyebrows. “Can you?”

She had a few tricks up her sleeve to get away from a situation if she needed to. Hoped to learn a dozen more before the week of training was complete. The only thing she didn’t have with her was her weapon, but she didn’t think she needed it.

Instead of answering him, she looked at the ink on his arms. “Does that go all the way up, or have you just started?” In her experience, people that liked ink, loved ink. If they could afford it, they had more than one tattoo with the plan for more.

He took her invitation to remove his shirt slowly.

She lifted a finger in the air and made a rolling motion.

He took the hint and turned around.

“Oh . . .” It was an eagle, a massive statement that spread over his entire back, with wings that touched the edges of his shoulders. Jo leaned forward on the bed and reached toward him, her fingers touching the edges of the bird. “That’s . . . wow.” She stood and felt the muscles under the ink until her focus was on the man.

His chest expanded when she traced the outline of his shoulders with both hands before letting them fall to his narrow waist. At the waistline of his jeans, she squeezed. “I definitely like.”

New York Times bestselling author Catherine Bybee was raised in Washington State, but after graduating high school, she moved to Southern California in hopes of becoming a movie star. After growing bored with waiting tables, she returned to school and became a registered nurse, spending most of her career in urban emergency rooms. She now writes full-time and has penned the novels Wife by Wednesday and Married by Monday. Bybee lives with her husband and two teenage sons in Southern California.