Excerpt: In Deep by Blue Saffire

Today we have the excerpt for the second book in Blue Saffire's Blackhart Brothers series. Plus you can enter to win the first book in the series.

Book two is coming out in eBook first.

I'll do anything to protect what's mine...

The last thing I needed was a call from my old precinct letting me know my knucklehead nephew had been picked up for skipping class. Still, I figured it would be an in-and-out visit. Quick. Simple. But the moment I heard her voice, I should've known it would be anything but easy.

I wasn't expecting the feelings that came roaring back the moment I laid eyes on the saucy detective with the gorgeous smile, but I probably should've seen it coming. Our history is one for the books, and it's a page-scorcher. And now here she is, standing in my way, and I can't seem to remember why I ever let her leave my side.

It looks like the sparks between me and Detective Danita Moralez are as intense as ever, but she's also more guarded than before. Two years ago, she walked out of my life because she wasn't willing to reveal the dangerous truth about her undercover work. This time, she's not going to get away so easily.

“Come on, boy,” I say as I grab my keys and Sunny’s leash after my stretch.

I scroll through my phone to find a playlist as I head for the door. Sunny starts to bark and a smile comes to my face. We have a visitor, and I know exactly who it is.

I wasn’t expecting Kevin until later. He said something about spending time with the kids. I hope he was able to finally get something out of Conroy this time.

Looking at my watch, I’ve let this day get away from me. After binge-watching more Netflix with Kevin all night, I decided to sleep in. Things between us have been interesting, to say the least.

We’ve sort of eased back into the friend zone, but the sexual tension has almost doubled as has the connection I shouldn’t be allowing to form. When I open the door to find him in sweats and a T-shirt, I have no doubts why the attraction has increased.

He makes the simplest outfits look like fine tailoring. His hair is a little messy as if he didn’t take the time to style it after his shower. However, I know he’s showered because I can smell his fresh bodywash and cologne.

I clear my throat and hold up the leash. “Taking Sunny for a walk, might get in a run while I’m at it,” I reply.

“Sounds like I’m right on time.” He nods toward the street. “Come on, they’re talking about rain. We should get a move on.”

I look up, but the skies are still clear. I shrug it off and head out of the door and lock it. Kevin takes the leash from me and hooks it to Sunny’s collar. We start for the dog park in silence.

I get lost in my thoughts for a bit, until Kevin bumps me with his shoulder. I look up into his green eyes, and I’m entranced for a second, causing me to trip over my own feet.

Kevin reaches out an arm and catches me before I face-plant, tugging me into him. My breasts squish up against his hard chest, and I melt into his hold. My lips part and I stick my tongue out to wet them. Kevin’s gaze drops to my mouth and follows the movement.

This time, he’s the one to clear his throat as he releases me. I take a step back, and we both begin to walk again. My palms start to sweat like I’m a teenager on my first date.

“I talked to Con today.”

“Did he say anything?”

“No, I think you should spend some time with him again. You’re the one we need him to trust. I think seeing you around the family will loosen him up,” he says as we stroll.

I nod. “Sounds good. I’m ready to give anything a try.”

His eyes are on me, but I don’t turn to face him. I can feel the questions on the tip of his tongue. I know it’s getting harder for him not to ask them. They haven’t gotten any new leads, not even with the file I gave them.

Not able to help myself, I chance a peek at him. He’s examining me closely. He tilts his head and squints a bit.

“You’re not a natural brunette,” he says, almost as if saying it to himself.

Shit, I meant to dye my roots this weekend. I noticed them showing a few days ago, but between work and the time I’ve been spending with Kevin on the case and as friends, I haven’t had the time yet. I lift a shoulder and squat to release Sunny from the leash.

When I stand, Kevin searches my face and hair closely. “You’re a redhead,” he says as if he’s in awe.

“Not really red. A reddish sandy-brown. In the summers, it tends to look more red.”

He bobs his head, lifting his hand to brush my temple. “What else don’t I know about you?” he murmurs.

He opens his mouth as if to protest, but he clamps it shut just as quickly and shakes it off. We begin to walk again. I’m startled when he reaches to lace his fingers with mine.

Looking down at our joined hands, I smile, only to frown at myself. This feels too real. Not like we’re putting on a show for whoever could be watching.

“I forgot the popcorn in the car,” he says randomly.

“Oh, okay. Were you planning to hang out late again tonight?”

I hate the hope that I hear in my voice. Although I hate my reaction to the breathtaking smile he turns on me more. God, this man is so gorgeous.

With the fading sun at his back, all his features are on display. The light causes the reds and golds in his hair to stand out. The wrinkles around his green eyes say he laughs a lot and smiles plenty.

I want to reach out and brush his cheek—like he often does mine—to feel the light stubble that has started to grow. I have to demand my body not to move closer to him. He’s like a magnet all in himself.

“I had planned to stick around. If you have something going on, I can head back to my place to change or something,” he says.

“Oh, no, you don’t have to change or anything. I was only asking,” I say, tearing my eyes away from him.

He releases my hand and wraps an arm around my shoulders to tug me into his side. With a gentle squeeze and a kiss to the top of my head, he leads me closer to where Sunny is chasing a butterfly. Again, that feeling of this being right slams into me.

“So, you plan to cook for your man tonight?”

The question jars me a little as it speaks to so many of my thoughts. I know he’s only teasing, but the title feels way too accurate. Especially when he shifts my body in front of his to embrace me from behind as he buries his face in my neck.

“You promised me some of your famous chicken eggrolls. Wait, no, I think I’m more in the mood for spaghetti. You were talking big junk about your spaghetti,” he teases.

“I’m making you neither. You’ll have empanadillas tonight. I’ve been craving them, and I have everything at the apartment.”

“Sounds good,” he breathes against my skin.

I fight not to squirm as his breath fans my neck and causes butterflies to build. I immediately feel the loss of him as he releases me and whistles for Sunny to come over. I watch him as he stands and waits for my dog to run to him.

I take in every gesture, every move. He runs a hand through his messy red locks as a genuine smile lights his face. He squats to play with Sunny, only turning to look up at me as I’ve been watching them for a while.

“I think your mum has a lot on her mind today,” Kevin says to Sunny.

Sunny barks his agreement, bringing a smile to my face. I shake my head clear. “Maybe,” I reply.

“You can talk to us, love. We’re listening.”

“I’m good. I won’t be needing a seat on Dr. Sunny or Dr. Blackhart’s couch, thank you.”

Kevin puts his fingers to his chin thoughtfully. “Dr. Blackhart. You know, I never thought about it, but that would have had a nice ring to it.”

He looks me in the eyes. “Aye, love. Ya speak a truth there.”

I look away, checking my watch. “Want to get in that run with me?”

He lifts to his full height and starts to stretch. “Sure, why not?”

While he stretches, I make myself busy with finding my playlist and getting my buds in. Not that I’ll use either. Kevin has the stamina to run and talk. The first time we jogged together, he challenged me and showed me that there are levels of fitness, and I wasn’t on the level I thought I was.

“Okay, ready?” he asks as he pats my ass, snapping me out of my thoughts again.

I blink at him as he jogs backwards away from me, Sunny following after him. I growl at Kevin and start after him. “I’m going to kick your ass for that.”

“You have to catch me first, baby,” he taunts before turning and taking off.

I give chase, but not without taking notice of the pang in my chest. If he were any other man, I would have slammed him to the ground and tried to break his damn arm. Instead, I can’t stop thinking of his touch.

Crap, I’ve fallen for him.

Buy the eBook on Amazon

This giveaway is now over. The lucky winner of the first in the series is: Glenda M. 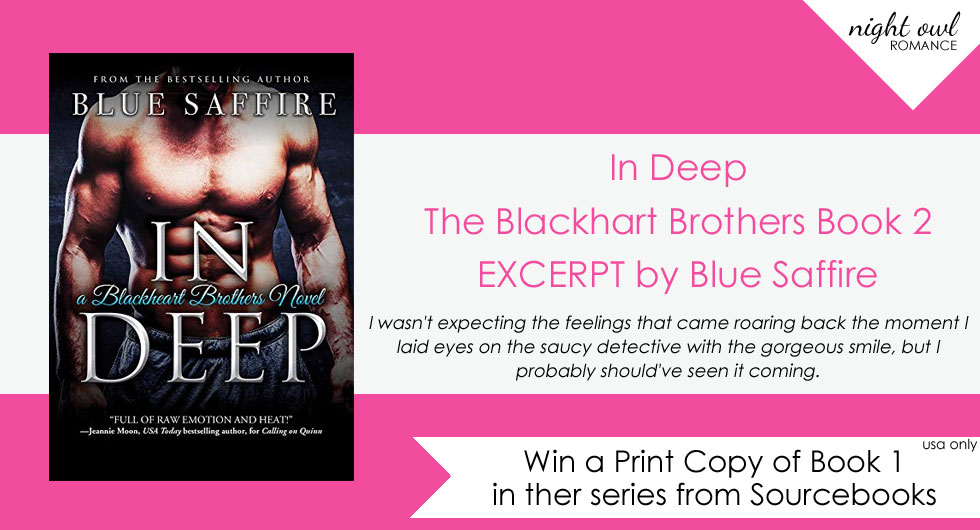