Carolyn Brown has stopped on over to share an excerpt with you of her book Cowboy Bold!

One city girl, one die-hard rancher, and eight mischievous kids. What could go wrong?

Every summer Cade Maguire looks forward to opening his Longhorn Canyon Ranch to underprivileged city kids. But this year, he's having no luck finding a counselor for the children-until Retta Palmer walks through his door.

Flat broke after selling everything she owns to pay her father's medical bills, Retta is thrilled to hear of an opening for a counselor position. She's not as thrilled about the ranching part, or the sexy cowboy with beautiful blue eyes who's her new boss.

After being left at the altar two years before by his fiancée, Cade isn't sure he can take another heartbreak. And Retta isn't even sure she wants to stay. But the sparks between them are absolutely undeniable. And with a couple of lovable kids and two elderly folks playing matchmaker, Cade and Retta may find that the best way to heal is with each other.

Cade passed out straw hats to everyone as they filed out to get on the hay wagon, and Retta was more than glad to settle her new straw hat on her head. It didn’t feel as good as the one she’d left behind at the farm but with sweat and time it would shape up and fit right well.

“I like my hat. It’s like Cade’s. ” Benjy plopped the one with his name on the inside down on his head.

“Me too.” Alice crammed hers down on her braids. “Do we get to come back next year?”

“I need to draw the wagon. Some hay wagons have wood wheels.” Benjy walked away and chose a seat at the back of the wagon.

“Once you turn thirteen, you don’t get to come back,” Retta explained in a low voice.

“I’m only ten so that means I might get to do this again.” She beamed as she skipped down the porch steps.

The tires on the old wooden wagon made the ride a little less bumpy. But the wagon itself was the same as she’d been in dozens of times as a kid. Open air, benches on two sides, and hay strewn on the floor. She spotted a cooler at the back and figured that it was full of either water bottles or cold drinks.

She sat down beside Alice, and Sasha quickly sat on the other side of her, which meant again that Gabby and Faith had no choice but to sit together. Maybe Cade was right about making them learn teamwork.

Skip pointed toward the pasture where Levi was baling hay. “This is a self-supporting ranch as much as possible. We grow our own hay for the cattle in the winter.”

Retta listened with one ear but if she leaned far enough to one side, she could see Cade’s face reflected in the side mirror on the tractor pulling the wagon.

“Those are some whompin’ big hunks of hay to be picking up,” Faith said.

Retta quickly jerked her head back. “Those will stay in the field. They’ll line them up against the far fence line and then bring them to the cattle as they are needed.”

Skip nodded. “Look over in that field at those small bales. Those are the ones that we take into the barn. We don’t make a lot of the little ones, but sometimes they’re needed in the stalls if we’ve got a cow or a bull that has to be kept up for a while.”

“I could get them bales to the barn,” Nelson said.

“I can and if I do, then I make money to take home, right, Skip?” Nelson asked.

“That’s right, and we can always use all the help we can get.”

Retta could see dollar signs dancing in all of their little eyes as they thought about helping haul that hay to the barn the next day. When she looked at the mirror again, she caught Cade’s eye and he winked at her, causing a blush so deep that she removed her hat and fanned with it.

Carolyn Brown is a New York Times and USA Today bestselling author, as well as a RITA finalist. She has written several beloved and popular romance titles, ranging from historical to contemporary to cowboy-themed. She and her husband live in Davis, Oklahoma. They have three grown children, and enough grandchildren to keep them young. 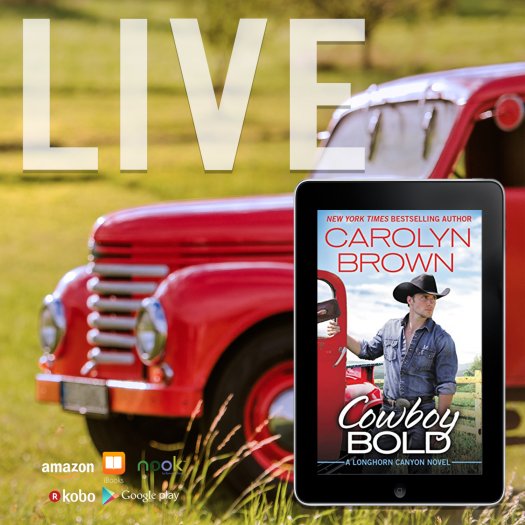