My Summer, 2020 trilogy will be released in a few days. This year, it’s my Lost Girls trilogy.

As you can see from the covers, I used a common thread that all of my heroes are connected to the British navy. My heroines were lost when they were little girls traveling to Jamaica with their parents. Their ship sunk in a storm, and they were the sole survivors. They were found on a deserted island by British navy sailors, and the navy returned them to England safe and sound, where they were separated and handed over to distant relatives.

Throughout their lives, they’ve always had a fond affection for the navy. As they become adult women, they fall in love with three sailors. The heroes are so yummy! How could they resist?

The 3 novels will be released on the same day, so you can read the whole series at once without having to wait for the next installment. They’ll be available both as print books and e-books. My Lost Girls trilogy! Coming August 11, 2020!

I work constantly, so I’m always busy. My writing business is more than a full-time job, and I produce three novels per year, so I don’t have very much free time. When I shut off my computer for the night, I have to slow down my brain, so I “veg out” by reading, coloring, or working on jigsaw puzzles.

I love to find a good TV series and binge-watch all the episodes. I recently finished the Netflix series, “The Last Kingdom”, that is based on one of Bernard Cornwell’s series. He’s a terrific author, and it’s a yummy story about handsome, macho Vikings—which is always fun.

I wanted to be a writer!!! And I wanted to be rich and famous, which, when I look back on my childhood, was a very peculiar dream for me to have. When I was growing up, I lived in a small town in rural America. And we were so poor! I’ve come a long way and been very lucky!

For several summer now, I’ve been writing linked trilogies that have a defined premise that carries the plot through all three novels. In this series, the link is that the heroines were traveling to Jamaica with their families when they were little girls, and their ship sank in a terrible storm. Against all odds, they were the only survivors. They were found on a deserted island by British sailors, but no one could figure out how they survived—and they were too young to explain much of what had happened to them.

They were returned to England, where they enjoyed a bit of notoriety. Then they were separated and doled out to distant relatives. They never saw each other again. When the novels start, it’s the 20th anniversary of the shipwreck, and the three women’s lives are pitched off in new and exciting directions where they meet the men of the dreams.

Contest & Rules
Entry is: USA ONLY

Cheryl is celebrating the release of her new LOST GIRLS series by running this contest. She will give away ten autographed print copies of Book #1, Someone To Love, to ten lucky winners. Since the first three novels in the series will be released together on August 11th, she will also give away one grand prize to one lucky winner of autographed print copies of Books 1, 2, and 3. The three books included in the Grand Prize drawing are: Someone To Love, Someone To Cherish, and Someone To Wed. So there will be eleven winners in all!

The contest begins on June 28, 2020, and entries will close on August 12, 2020. The drawing will be held the next day, August 13, 2020, and winners will be notified by email. You may enter as many times as you wish, but please be aware that Cheryl’s books contain adult content. You must be 18 years of age or older to enter. All entrants’ emails will be added to Cheryl’s general mailing list. The email addresses are used to provide readers with information about Cheryl’s career and her upcoming novels, and the list is never shared with anyone.

Cheryl can only ship prizes to U.S. addresses. Thank you for understanding.

This giveaway is now over. The lucky winners are:

She lives and writes in Hollywood, California, and she loves to hear from fans. Visit her website at www.cherylholt.com. 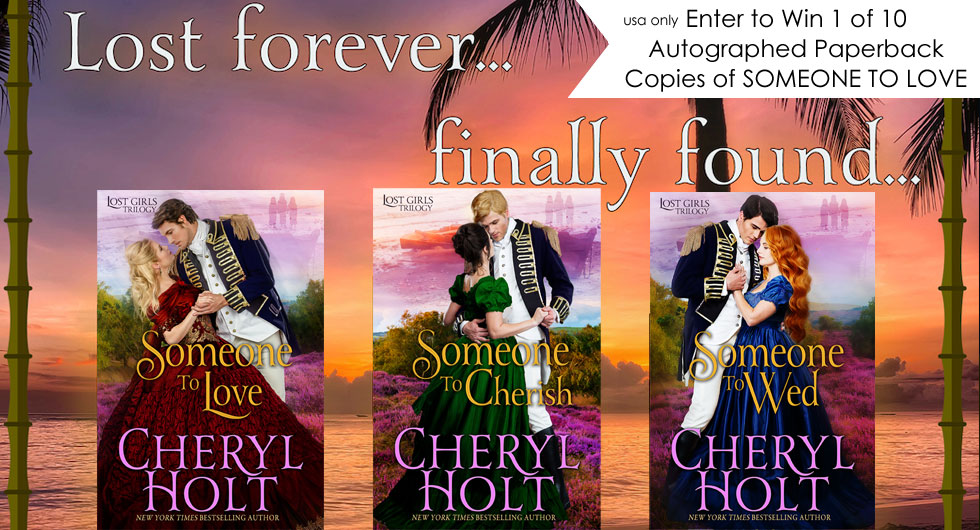