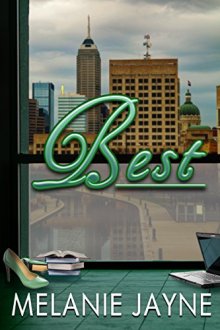 Today we have an exclusive first chapter from BEST for you all. We hope you enjoy the book!

I have a new name in a new city.

Even though we’re Even though we’re only friends, Tye sleeps in my bed every night. After everything I’ve been through, I don’t believe I can handle more. But if relationships aren’t his thing, why is he here?

I wanted Billie from the first moment I saw her. Her scars are deep and every day is a struggle. Learning her secrets is like unwrapping a gift; slower is better. I only want to protect her. That’s why I hold her every night.

We’re just friends, which is for the best.

I wrapped the coffee-brown towel around my hips and ran a hand through my hair. Although a comb sat on the vanity, I didn’t like using someone else’s. Resting my hands on the rim of the sink, I stared hard at myself in Holly’s mirror and felt a slight chill on my damp skin from the air conditioning.

This is it. The internal dialog that had been on stuck on replay for the last three weeks echoed in my head. I can’t believe I’m doing this, one voice said full of disdain. This is how you get what you want, like what Forde and Tony have.

“Time to do this.” I pushed away from the sink, while ignoring the apprehensiveness that hit me. No second guessing once a decision was made. A Burke did not show weakness—ever.

I strode into her girly pink bedroom. I hated this room. It was too frilly, too lacy for a woman like Holly who wasn’t soft in any way.

She sat in her bed with her back resting against the headboard tapping away on her phone. She didn’t even look up.

“So...” I started lamely. For a man who used his words daily to sway judges or arbitrators, I was starting this important conversation in an awkward manner

She stopped looking at her phone and transferred her attention to me. Large green eyes gave me a wary glance.

Perching on the opposite end of the bed, I waited until our gazes met. Stop being a pussy. “Do you ever think about this thing?” Okay, so maybe I should have planned a better opening line...

Holly knew damn well what I was getting at. I could tell by the way she her eyes slid away. “Between us.” I motioned with my finger at her then me.

She shifted and folded her long legs so that she sat straighter, Indian style. “First of all, there is no ‘thing’ and, secondly, there is no ‘us.’”

I started to interrupt, but she continued, neatly cutting me off.

“Tye, I told you that before we got together the first time.”

Yeah, she had. Holly Higgins did not “do relationships”. She’d mentioned it, but that was before we fucked almost every night. Something that might cause a guy to assume there was a relationship, and it was deepening.

The smile she flashed failed to reassure. “We aren’t those kinds of people, hon.” She pulled the sheet tighter over her luscious breasts.

“Yeah, but you have to admit we get each other.” I gave her the grin that had swayed many women to my point of view. “I haven’t heard you complaining.”

Her mouth tightened. “You knew we were temporary. I mean, you like to fuck. You’re practically a legend in this town. We’ve had fun, but that’s all it is.”

One of the reasons I can charge four hundred and fifty dollars an hour as the top family law attorney in Indianapolis is that I know when I’m not going to win. I tried another tack. “Do you ever get lonely?”

“Oh, God, not you, too.” She blew out a breath then slid out from under the sheet and moved to her closet door to grab her robe. She tied the belt around her waist then turned to face me. “Granted Forde and Layla are happy, and watching Tony hold little Olivia makes me want to be Zoe for one night, but you and me?” She snorted. “We aren’t like that. Being tied down to one partner...a home and kids—that’s not us, Tye.”

I used to think that was true but, lately, I’d begun to wonder. Sure, some of this had probably come from watching my best friend fall in love with a woman who thought he was a superhero. Their connection had proved unshakeable when Forde learned he had an eighteen-year-old son. Now, he and his wife were expecting their first child together. I liked hanging out at their apartment, lazing on the huge sofa, eating the snacks Layla brought us, and laughing at nothing. It made me feel accepted, loved. Almost part of a family...

Then I’d met Tony and Zoe Alessi. Tony now worked for Forde doing consulting work. At least, that’s what they called it. However, Tony wasn’t some desk-jockey investigator. He worked his contacts out on the streets, liked to mix it up. I sensed in him, despite his happy home life, the same hunger all the men working at Forde Limited had. They didn’t have problems closing a case by any means necessary.

Watching Tony interact with his family only deepened my growing dissatisfaction. Tony had a coldass stare—except around his wife and daughter. The fact Zoe was older than Tony hadn’t stopped him from falling madly in love with her. He didn’t care whether the entire world knew it, and now the couple had a seven-month-old daughter, who had the loudest scream I’ve ever heard. But she was adorable when she slept.

My firm employed Forde Limited to do investigative work. The two businesses took up the fifth floor of the National Bank building in downtown Indianapolis. It was a good relationship. When they weren’t handling my work, they did whatever it was they do. I didn’t ask. That was our deal. Years ago when I was starting out, Forde had promised my dad he’d keep our business relationship clean. As long as they did good work and my clients are happy, that’s all that mattered.

That’s not us. I gave Holly a sharp appraising look. She had issues connecting or at least that was her excuse for changing cities often and never looking back. “Maybe it’s only you, Holly. You’re the one who keeps moving, never letting anyone get close.”

Holly gave me a pointed look. “I think you should get dressed and go.”

I raised my hands in surrender. “Forget I said anything,” I muttered, not liking how she was making me feel. I mean, I’m a catch, one of the most sought after single men in town. She should have been happy I was willing to explore a deeper relationship with her.

She bent over and when she straightened, she was holding my pants. She then threw them at my head.

I grabbed them out of the air before they hit me in the face. “Holly, you don’t have to get pissy. I’ll go.” I stood and started looking for the rest of my clothes. “You should be happy I offered.”

She muttered something I couldn’t hear and turned to walk out of her bedroom.

After dressing, I headed into the living room.

She was waiting, leaning against the breakfast bar, her expression set. “We’re done.” Without another word, she headed to her front door.

I followed her. Time to mend fences. “Now, Holly, don’t be like that…” I tried to pull her into my arms.

She blocked me by pushing my arms away. “No. It’s for the best. Forde knows I’m looking at Vale, or maybe Aspen to work the ski season. Tonight just proved it’s time to go.”

I could tell by her intonation and steady gaze she meant everything she’d said. Well fuck.

Drawing a deep breath, I nodded. “Okay, babe. Whatever you say.” I opened her door and glanced over my shoulder. “But remember, we won’t be doing this again.”

Her chin angled upward. “That’s perfectly fine with me.”

My back teeth ground together. “Hold onto to that tomorrow night when you get lonely.” I walked through the door and into the hallway, my heart beginning to thud dully at my temples.

“No problem, Tye,” I heard right before the door slammed.

I walked down the steps to the first floor with my head held high. “Bring on the bitches,” I said under my breath. Fuck her. Yeah, I knew I wasn’t in love with her, but we both liked sports, working out—and sex. As far as I was concerned, she was a good match. “Plenty more out there,” I told myself as I stomped toward my black Range Rover Sport.

Once I sat behind the wheel and cranked up the Foo Fighters, I realized the next several weeks were going to suck. I’d still have to see Holly at work. I smacked the steering wheel.

Now, I’d have to cut back on my visits to Forde’s office until she left. Not because I was hurt by her rejection. No, I’d make myself scarce because I didn’t want her to feel uncomfortable. My tension bled slowly away, and I smiled ruefully. At least, that was the story I was going to spin.

I live on a grain farm southeast of Indianapolis, Indiana with my very patient husband of twenty-five years and our two English Mastiffs, Buster Brown and Ginger. I graduated from Indiana University when it was the #1 party school in the country and I took great pride in helping the school achieve that ranking.

I haven't figured out what I want to be when I grow up. I change careers every decade. I have worked in retail, a federal courtroom, travelled across the state closing loans, and behind the scenes in a casino.

I've always had an active imagination so when a good friend suggested that I try writing a book, I thought why not, it should be fun. It has, but I have had to work very hard to learn how to do it. I am so lucky for the outpouring of advice and education from so many in the industry, plus the hand-holding and cheerleading from My Gurls. I also have an incredible Ad-man-istrative Assistant, who tries to keep me under control. He rolls his eyes so much that I worry about a permanent condition.

When I ‘m not working or writing type stuff, I sleep, watch courtroom TV shows, and sports. I was a competitive pro-am ballroom dancer for ten years and I read as many books as I can.

I love to attend Author-Reader Conventions and look forward to meeting you.